Friday, December 5 was the last day of our trip! The night before we’d been out late finishing up 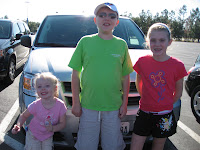 shopping so the kids pretty much crashed on entering the room. Tracy was up the latest stressing over what we may be leaving by hind but it seems like she got everything. We let everyone rise on their own schedule as today would be long; our flight wouldn’t get to Newark until nearly 11 pm. The entire car was packed and we arrived for a final visit this year at the Magic Kingdom. Max had wanted to do the monorail (he remembered his co-pilot trip from early very fondly) but the line was way too long and we opted for the Ferry instead. 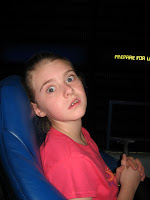 On our walk down (up ?) Main Street USA we got several pictures with the castle in the background. Gwendolyn was dying to get on Space Mountain and not getting that done had the potential for her to consider the trip a bust so Tracy and Gwendolyn headed in that direction while Bob took Max and Olivia to get the last two cars on Max’s souvenir list. Walking into the shop Bob saw Sue Ort, yes Sue Ort the teacher at Old Farmer’s Road and member of the Ort Farm clan. Sue had watched Bob and his brother as well as Carey and Casey MItschele eons ago when cows still roamed on what is now Douglas Drive so it was great to catch up with her. She and her sister Wendy were visiting and today happened to be Wendy’s birthday. After Max met Sue he was getting impatient to make sure his cars were still here so we found and paid for his treasures and then headed to Tomorrowland where the plan was to wait outside the Laugh Floor for Tracy and Gwendolyn.
About 10 minutes of waiting (which had been followed by a not so short shopping trip) but got a text message from Tracy saying that Space Mountain was shut down but they were on the ride. Tracy suggested a trip on the people mover to see if we couldn’t get a picture of the oldest girls from this angle. Fortunately, the ride was already working again when the people mover cruised through Space Mountain so we met up at the Laugh Floor. During this show, Olivia was ‘chosen’ to play the part of Boo in the short story told by the animated monsters. She thought that was great – all she had to do was play Peek-A-Boo – and Max and Gwendolyn were proud of her performance.
We ran out of there and through Buzz Light Year for a final visit with Buzz and Zurg. Bob no longer remembers who shot the most that time but is pretty sure Olivia beat Max soundly. At this point it time for lunch at Cosmic Rays. This lunch went pretty well but we had wisely found a table far from Ray so Max didn’t get distracted by the bad jokes. 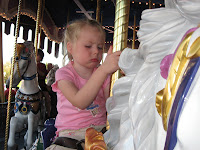 Oh, forgot to mention that today was in the 80s temperature wise (and we were back to a possible snow storm). With the heat Max was getting a little cranky so he and Bob opted for a break by the carousel while the girls tried to ride Dumbo. Dumbo was just not happening – the line was at least 40 minutes and we were on a short schedule today. The girls moved over to the carousel where we have a wonderful picture of Olivia expressing her pleasure (not) at skipping Dumbo. 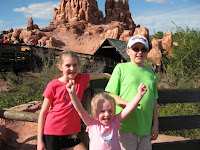 That part of our trip we headed to Thunder Mountain! This time, we were sent around to the exit by the cast member working the entrance. This was way cooler than the FastPass line; we got to talk to the Cast Members running the ride and we were told that the back of the coaster is the faster, cooler seat. Back it was for Bob and Max while the girls rode one seat forward.
Gwendolyn loves the wet rides but we hadn’t done any yet. Max really didn’t want to do Splash Mountain but relented when he was told we could do Thunder Mountain one more time … after Splash Mountain. Max wanted to ride with Tracy even though it is common knowledge that Tracy ALWAYS gets wet on these rides. Bob rode with the girls in the back of the car as Tracy had chosen the middle as the ‘dry’ seat. No shock when the ride ended with Tracy soaked, Max a little wet and the rest mostly dry. She dried a little on our last ride on Thunder Mountain before we headed towards ToonTown to see Mickey without Christmas garb.
On the way to Mickey we stopped by the Haunted Mansion but Bob fell asleep as soon as he sat down so there is really nothing to report :). The visit with Mickey went well and then we headed to the Laugh Floor which would be our final ride of the trip. Bob texted in a joke (Q: How do you cut the ocean in half? A: You use a Sea Saw of course!) with Gwendolyn’s name that he done last time with Max’s name. We’ll Gwendolyn was now nearly as famous as Olivia was earlier. Max was just happy to hear his joke read and wasn’t jealous that he hadn’t gotten credit. It was a nice way to end things.
On the way out of the park, Tracy had to shop for one more thing (how Bob didn’t see this coming is just beyond him). Gwendolyn went along to help while Max, Olivia and Bob shared a popcorn by City Hall. They were able to finish the entire box of popcorn and wash up before the shopping was done. All but Bob changed from shorts to pants in the parking lot. We finally got on our way at about 4:15 pm.
The Orlando airport (MCO anyway) is a little confusing for returning rental cars as there is one notice at the very beginning of the loops but nothing more until you’re right on top of the turn. Thankfully we didn’t miss it and found the AVIS return just fine. The guy that checked out the car found a sky cap to help with the bags and we were on our way home. Gwendolyn grabbed a sandwich while Max and Olivia got milks (Liv’s was chocolate, of course) while we waited for our plane. The flight home was uneventful; Max and Olivia slept for most of it. We arrived at Newark right on time and were greeted by 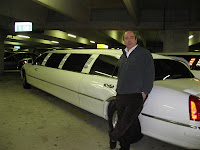 Jim, our limo driver, who had secured two carts in anticipation of our having a really large number of bags. Good call. Everyone was excited for the ride home but only Olivia and Bob were awake by the time we got to Route 78. We arrived back in Flanders safe, sound, and utterly exhausted at about 11:00 pm. Jim and Bob got the bags inside while Tracy got the kids ready for bed. Bob then ran to the A&P to get essentials before they closed knowing that doing it in shorts and 25 degree weather while he was still awake would be preferable to having to get up at 5 am when Max came to let him know that there weren’t any bananas or milk ;-)
Posted by Bob at 11:57 PM